EKG Challenge No. 12 Case Conclusion: Because We're Only Human

You are working as the "triage physician" in a busy city emergency department when a 34 yo female presents with chest pain.   The pain is retrosternal and burning in nature and has been persistent for 3 hrs.  It is associated with some nausea, but no shortness of breath or diaphoresis.  You order a GI cocktail and get an EKG: 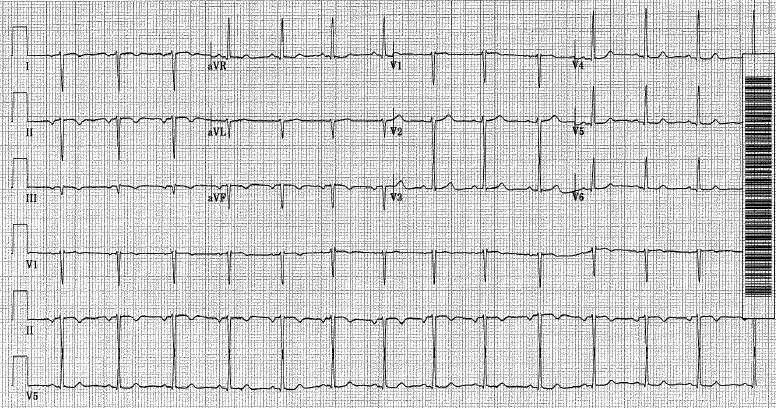 You systematically review the EKG.  The heart rate is normal. There is a p wave before every QRS complex, but the p-wave axis is abnormal (negative in lead II).   There is now an extreme rightward axis as the QRS is negative in leads I, II and avF.  As you analyze the ST segments for evidence of ischemia, there appears to be T wave inversions in the inferior distribution of II, III, and avF.  You start considering the differential of ectopic atrial rhythm, right axis deviation, and T wave inversions including PE or ischemia but stop yourself.  You think  "did someone switch the leads?"  You take a brief look at aVR and see that the P, QRS and T waves are positive, making you even more suspicious.

You ask for a repeat EKG to be performed: 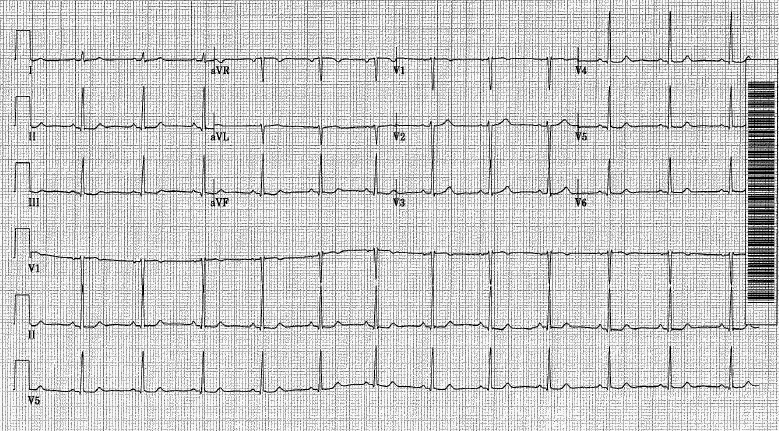 To think through how this limb lead reversal causes the changes seen in the original EKG, you have to go back to Eintoven's triangle made up of three bipolar leads ( I, II and III) and three augmented unipolar leads (avR, avL and aVF) (Figure below).  The right leg lead serves as the ground.   A lead reads as "positive" when the direction of the electrical impulse the same as the direction of the vector.  In a normal EKG with a normal axis,  the QRS is positive lead I, II and avF because they are directed towards the left side of the heart. aVR is almost always negative because it is directed opposite the cardiac apex. 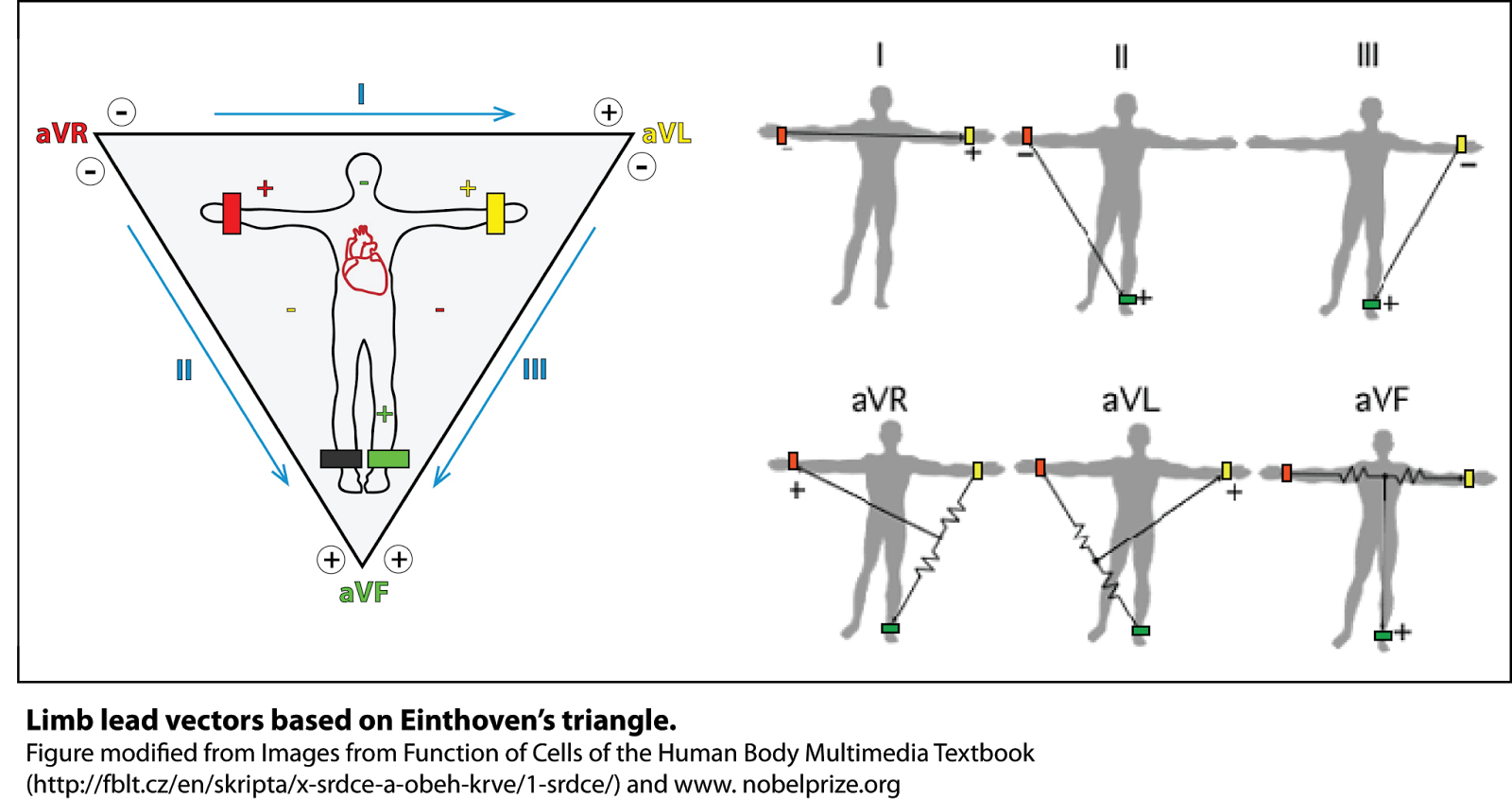 Take a moment to compare the two EKGs above, and see that this is what has happened.

It can mimic left anterior fascicular block and inferior infarction pattern, but can be suspected based on a positive P, QRS and T wave in lead aVR and extreme right axis deviation.

Limb lead reversals are important to recognize in that they can mimic pathology including myocardial infarction, ectopic atrial rhythms,  and conditions characterized by diffuse low voltage (pericardial effusion or pulmonary disease)[1]. You want to be able to catch them because you do not want to make critical clinical decisions based on misinformation. There are case reports of changes in patient management that occurred based on incorrectly acquired EKGs  that mimicked a pseudoinfarction or junctional rhythm pattern, including thrombolytic therapy in a patient with a baseline abnormal EKG and limb lead reversal [2,3].

Fortunately, other than the sense that "that EKG just don't look right!",  there are typical patterns that can clue you in that a limb lead reversal may be present.

General clues that there may be a lead reversal (limb or precordial) include [4]:

Limb leads:
1. Abnormal P axis with positive P wave in avR and/or negative P waves in lead I and/or lead II
2. Very low amplitude in the lead I, II, or III
3. Concordant negative QRS and T waves in the leads I, II, III and/or aVF

Precordial leads:
Abnormal R wave progression in leads V1 to V6, especially when the R wave amplitude increases after an initial decrease in the precedent leads.

The above features can be highlighted by reviewing the typical lead reversal patterns [3,5].  Note images below are all from the same "patient" whose EKGs are featured above.

1. Arm electrode (LA/RA) limb lead reversal: This reversal is the most common limb lead reversal.  The tell-tale sign is an inverted p wave, QRS complex, and T wave in lead I.  In the absence of dextrocardia, this is pathognomonic of arm electrode reversal.  Remember, as general rule I and V6 point the same direction and should look the same on the EKG.  aVR and aVF have switched places, so they both look grossly abnormal as well.  An example:
In a Right Arm-Left Arm lead reversal:
1. Lead I will be a complete inversion of itself
2. Lead II and Lead III will switch places
3. Lead aVL and aVR will switch places

If you notice, both lead reversals involving the right arm lead to an abnormal appearance of lead aVR.  One more instance where lead aVR, which is often ignored by emergency physicans and cardiologists alike, can be very useful [6]

As Eintoven's triangle is flipped 180˚ around the axis formed by aVR, the following happens to the EKG:
1. Lead I and II switch places (hence the p wave larger in I than II)
2. Lead III becomes an inversion of itself
3. Leads aVL and aVF switch places

3. Right Arm/Right Leg (RA/RL) limb lead reversal: The key to picking up this reversal is an isoelectric recording in lead II.
This "flat-lining" of lead II happens because the right leg (ground) lead - which the electrocardiographic processor recognizes as having no potential difference from the left leg - into the right arm position.  Since lead II is the difference between the Right arm and Left leg, this comes out as a flatline.  aVR and aVF are also switched, resulting in uncharacteristically positive QRS in aVR.

4. Left Arm/Right Leg (LA/RL) limb lead reversal: The key to picking up this reversal is an isoelectric recording in lead III.  The "flat-lining" occurs for the same reason above, except that this time there is no perceived difference between the right arm and the right leg.

5. Right Leg/Left Leg limb lead reversal usually leads to an EKG that is indistinguishable from normal. 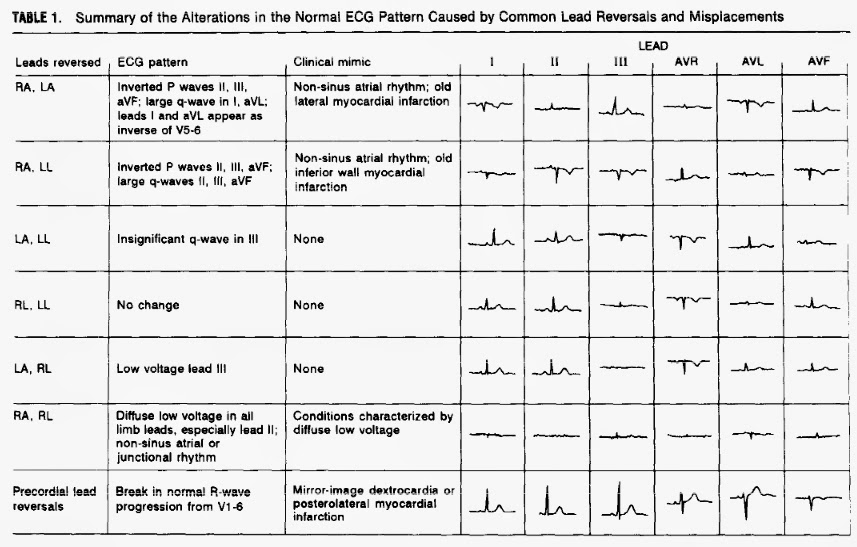 For more review, Life in the Fast Lane has a great explanation of Eintoven's triangle in limb lead reversals.

Take Home Points:  When evaluating EKGs, be on the lookout for the EKG findings suggesting limb lead reversals as these can mimic pathology include acute MI, abnormal atrial rhythms, and conditions causing low voltage.  Clues to finding these are abnormal P wave axis, extreme axis deviation, concordant negative QRS and T waves in the leads I, II, III and/or aVF.  When in doubt, repeat the EKG.