A middle-aged female is brought in by EMS yelling and thrashing on a stretcher.  Per report, she was found unresponsive next to the couch by her daughter.  She was given 2mg of IM Narcan and woke up a bit and has been agitated ever since.  You just begin your assessment and order some labs before you are pulled away to two Level I traumas and an impending respiratory arrest.  As you head back to the patient's room to complete your assessment, you receive a "critical value" phone call from the chemistry lab.  You are told that your patient has a troponin of 0.65.

After thinking to yourself, "Oh S--- I didn't expect that, not even 100% sure why I ordered it", you realize that you have not yet seen the EKG.  It's not in the chart, so you hurry to her room to find a nurse and security wrestling with  half-naked agitated patient who is trying to stand up on the stretcher and grab on to the light fixture above.  You call your attending and he agrees "that THIS" (turning to the wrestling match) "is not going to work."  You decide to intubate her to facilitate your greatly expanded workup for altered mental status.  Post intubation, you get this EKG: 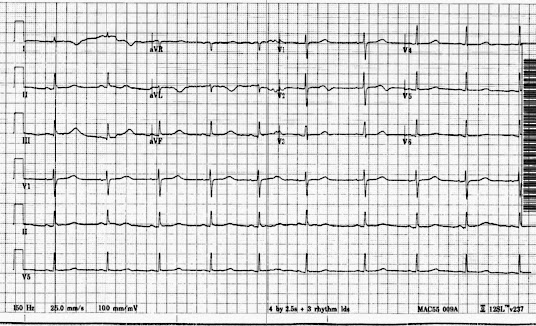 When you first look at the EKG nothing in particular really jumps out at you.   There are some T wave inversions in I and avL,  as well as a biphasic T wave in V2. Sure that there is something more, you decide to take a moment and go through it systematically.  When you get to examining the intervals, everything on the surface looks fine, but you remember reading on Steve Smith's ECG blog that calculating the QT interval can be tricky (especially for computers) and decide to calculate it yourself:

To calculate the QT interval, you start by drawing a line along the maximum slope of the T wave  and marking where it intersects the isoelectric line.  The distance from the preceding Q wave to this intersection point is the  QT interval : 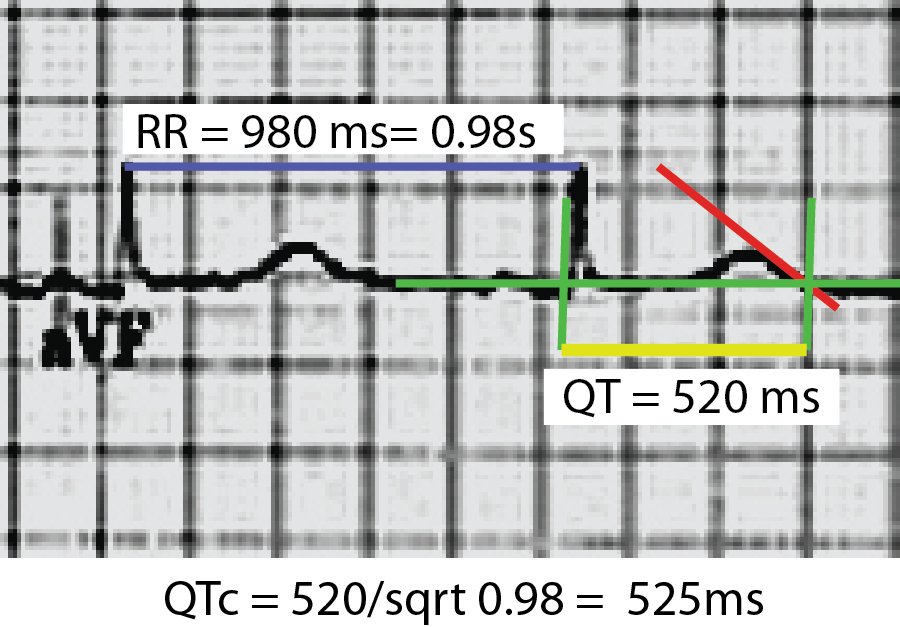 To calculate the corrected QT (QTc), you  use Barrett's formula and divide the QT interval in milliseconds by the square-root of the preceding RR interval (in seconds).   In the case of our patient, the QTc is 525 ms, prolonged by any standard.

While you are running through your differential for altered mental status + positive troponin + prolonged QT, the patient is taken get a head  CT.  You go with her and recognize the subarachnoid hemorrhage star of death as it appears on the screen of the CT tech in front of you: 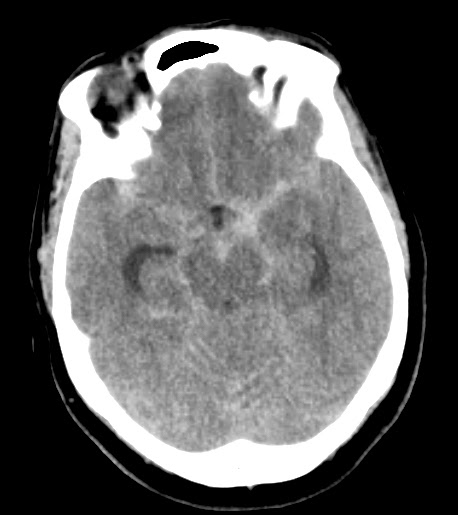 Neurosurgery emergently places a ventriculostomy drain and the patient is admitted to the Neuro ICU.   When you go home after your shift, your brain is buzzing, making sleep impossible.  You've heard the term "neurocardiogenic" injury before and decide to look into this interesting brain-heart connection.

Neurocardiogenic injury is a term used to describe the diverse number of cardiac abnormalities associated with central nervous system disease[1].  Patients with neurovascular emergencies (most notably SAH) can develop subendocardial myocyte damage, global or regional left ventricular systolic dysfunction (incidence of 10-28% in SAH), low-grade troponin elevation (20-40% of patients with SAH), and a diverse number of EKG abnormalities linked to the development of life-threatening cardiac arrythmmias.  Significantly, these occur even in the absence of underlying cardiac disease.  Multiple theories have been proposed for the mechanism of neurocardiogenic injury, the most popular of which postulates that a "catecholamine-surge" leads to myocardial damage.  Others postulate that a wide-spread inflammatory state, such as seen in septic shock -induced myocardial dysfunction, is responsible.  Interestingly, the degree of cardiac injury as measured by troponin level (>0.3 ng/mL) correlates with SAH severity (in terms of Hunt/Hess grading) [2].

1.  Wide, deep and bizarre appearing T wave inversions - The most striking EKG manifestation of CNS disorders are bizarre-appearing, deep and widely splayed T waves usually in the precordial leads [4,6].  Some form of T wave abnormality, including both flattening and inversions, is seen in approximately 15% patients with ischemic stroke and 55% of patients with SAH [1]. While we typically associate T wave inversions with acute myocardial ischemia, the EKG changes can occur even patients with normal coronaries [5].


2.  U waves - In the original case series by Burch (1954) describing EKG abnormalities in stroke, it was observed that a subset of tracings had U waves even in the absence of hypokalemia [4].  Subsequent studies have found new U waves in 13% - 15% of patients with acute ischemic stroke and SAH [1].  In a subset of these cases, it is possible that some of the prolonged QT observed is actually a form of T-U fusion.
3.  ST elevation - Some form of ST segment change occurs in approximately 20-30% of patients with stroke.  A small subset of these patients will also have ST elevation (see example below).  While ST elevation can be seen with neurocardiogenic injury, it is still important to consider dissection in patients with cerebral ischemia and ST elevation on their EKG.


While the EKG changes are interesting,  do they have any clinical significance or prognostic value?  This remains unclear.  Cardiac dysfunction and EKG abnormalities due to neurocardiogenic injury are usually transient, normalizing over days 3-8 post-injury (at least for SAH)[1].  One small retrospective study of only 58 patients attempted to examine whether EKG status was predictive of all cause mortality in SAH [7].  While it was found to correlate strongly with severity of SAH, no independent predictive value was found (see table below).  The EKG, therefore, in addition to the clinical exam, may be an indirect marker of SAH severity associated with increased all-cause mortality.

For the most part, the EKG changes themselves do not require specific treatment, but clinical investigation should include evaluating for other potential causes (i.e. electrolyte abnormalities or true coronary ischemia).  Patients with these changes should have continuous cardiovascular monitoring during the acute period because of the risk of serious arrythmmia.  Despite risk of arrythmmia, these patients benefit from specialized neurocritical care, and belong in a NeuroICU instead of a cardiac care unit.

Take home points:  Troponin elevation + EKG changes does not automatically point to primary cardiac pathology and can occur even in the absence of underlying cardiac disease.  Remember to consider central nervous system pathology in a patient with altered mental status + EKG changes or elevated troponin.  Because EKG changes can have important clinical effects (such as predisposition to life-threatening arrythmmias), the EKG is an important component of the clinical work-up for CNS disorders. And as always, drug-induced altered mental status should be a diagnosis of exclusion because sometimes people use heroin to treat the worst headache of their life.