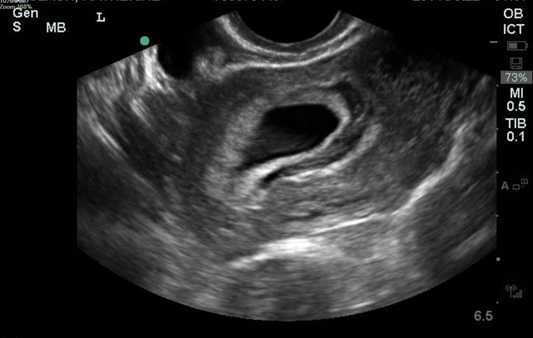 A 20 yo G1P0 at 6wk1day by LMP presented with vaginal bleeding.  She had onset of bleeding 1 hour prior to arrival, soaked through 1 pad.  She was seen at her OB earlier that day (prior to onset of bleeding) and had an US which showed +FHR.  Transabdominal and transvaginal ultrasound showed an IUP with +FHR of 120 BPM (image below).  Her beta hCG was 72,813 and she was Rh+.  Hypoechoic material was seen surrounding the gestational sac, consistent with subchorionic bleeding.  The patient was given return precautions and instructed to follow-up with her OB in 48 hours.  You wonder if should have given any specific precautions regarding subchorionic hematoma?

Literature Review:
A threatened abortion is diagnosed when vaginal bleeding has occurred but the cervical os is closed and fetal demise has not occurred (if there is fetal demise + a closed os it's then a missed AB).  Subchorionic hematoma is commonly seen on routine obstetric ultrasonography.  It appears as hypoechoic or anechoic area behind the gestational sac in a crescent-shape in the first trimester and behind the fetal membranes in the second trimester.  The reported incidence of subchorionic hematoma has a large range (0.5% to 22%).

There is some thought that the size of the subchorionic hematoma may be associated with risk and pregnancy outcome.  There have been many different methods described to assess hematoma size.  However, many of the articles assessing size and risk have sample sizes that are too small.  One study found that a hematoma size of 2/3rds or greater of the gestational sac circumference was a good predictor of spontaneous abortion, OR 2.9 (1.2-6.8).  Many articles, however, fail to show an association between hematoma volume or size and risk of pregnancy loss.

Take home points:
So what should you advise your patients with early pregnancy bleeding and a subchorionic hematoma on ultrasound?  Give patients the same precautions you would give them for threatened abortion. However, when discussing risk of miscarriage with these patients you should advise them that their risk is higher than patients with a typical threatened abortion; closer to 20% of patients will have a spontaneous abortion.  If the amount of bleeding on ultrasound is large their risk is likely higher, but this has not been as well studied.