You are working in the emergency department when you get a pre-arrival for "abdominal pain, hypotensive".  You follow EMS into the room when they arrive and are confronted with an elderly female who appears very pale and quite sick.  Per the paramedics and the patient,  she has had upper abdominal pain, nausea and weakness for the last two days.  Her initial blood pressure is 80/60 with a heart rate of 112, and you start working her up for all the badness that causes hypotension and abdominal pain in the elderly.  Everyone gets cracking on some IV access,  and you head for the ultrasound to help you better evaluate the cause of this patient's hypotension.  You start with the cardiac views of your RUSH exam, and see this:

Given these findings, you order an EKG: 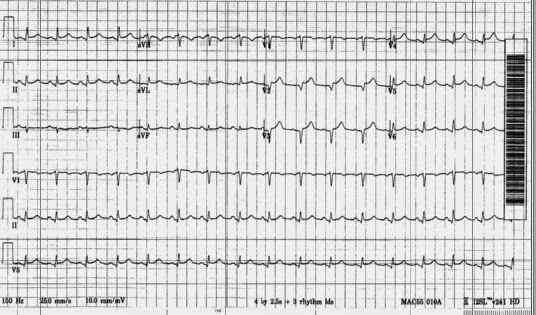 On review of the EKG you note ST elevation that is most prominent in V2 and V3 (although it can also be seen in I, II, V4, V5) without significant reciprocal ST depression: 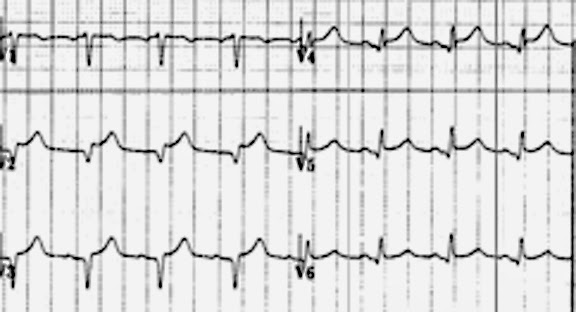 Given the apical akinesis and ST elevation in the precordial leads, the patient is sent for an emergent cardiac catheterization, which identifies no coronary artery disease.


The cardiologist notes apical akinesis of the patient's left ventricle, which during systole resembles a Japanese pot for catching an octopus.   He diagnoses the patient with Takatsubo's Cardiomyopathy.


Takatsubo's Cardiomyopathy, also known as Transient Left Ventricular Apical Ballooning Syndrome (TLVABS) is a fascinating syndrome that mimics ST-elevation MI.  It is characterized by transient wall motion abnormalities that extend beyond a single coronary distribution and involve the apical and mid-portions of the left ventricle [1,2,3].  The diagnosis is essentially one of exclusion; patients may not have any angiographic evidence of obstructive coronary artery disease or acute plaque rupture.  They also cannot have other clinical evidence of intracranial bleeding, pheochromocytoma or myocarditis [1].

Takatsubo's affects anywhere between 0.7 - 2.5% of patients with suspected ACS [1].  It has a strong predilection for postmenopausal women (~90% of cases) who have experienced either a strong emotional or physical stress.  The most common presenting symptoms are chest pain and shortness of breath, but nausea/vomiting, syncope, palpitations, and shock have also been reported.  The underlying etiology is unclear, but is thought to be related to a catecholamine surge.  Indeed, the serum catecholamine concentration in patients with TLVABS is 2-3X greater than in those with myocardial infarction [4].

What is fascinating (and unnerving) about Takatsubo's is that the EKG findings mimic ST-elevation MI.  A systematic review estimated a prevalence of ST elevation on initial admission EKG of  71.1% [1].  Another retrospective review of 27 consecutive Takatusbo's patients documented ST elevation in 56% of the cases [5].  ST elevation in most of these cases involves the precordial leads (V2-V4).  In a comparison with patients with anterior STEMI matched for age and sex, patients with Takatsubo's  had less pronounced ST elevation and were less likely to have some ST elevation in the inferior leads as well:

Despite subtle differences on a population scale, on a case by case basis there is no EKG feature that will reliably indicate that a patient has Takatsubo's and not a STEMI.  Therefore, these patients should go to the cath lab where the diagnosis will be made.

What was the cause of this patient's broken heart?  No recent breakups or deaths in the family in this case, just the physical stress of an upper GI bleed, an unfortunate coincidence given the heparin and plavix administered prior to the cath lab.  After developing melena and having a three-point drop in her hemoglobin, the patient underwent an upper endoscopy revealing a pyloric ulcer.

She did well, had resolution of her cardiogenic shock, and had an EF of 45% on discharge to home 10 days later.  In general, patients with this syndrome do well.  In-hospital mortality rate is approximately 1.1%, and most patients will make a full recovery[2].

Clinical Takehome:  The differential diagnosis of precordial ST elevation in a postmenopausal woman includes Takatsubo's cardiomyopathy, a transient syndrome of left ventricular akinesis brought on by physical or emotional stress.

Submitted by Maia Dorsett (@maiadorsett), PGY-3
Faculty Reviewed by Douglas Char
Thank you to Drs. Christopher Holthaus & Enyo Ablordeppy for the Echo video.  Thank you to Dr. Richard Bach for the videos of the cardiac cath.