Clinical scenario:  You are working in the emergency department when a car pulls up, dropping off an otherwise healthy male who has suffered a gun shot wound (GSW) to left shoulder.  He says that he was in the rear passenger seat driving around with friends and "minding his own business" when he heard multiple gun shots.  He felt immediate pain in his left shoulder.  A full exam reveals two wounds to the left shoulder and nowhere else.  The patient has bilateral breath sounds and his left arm is neurovascularly intact.  X-rays demonstrate no pneumothorax, but the patient has a comminuted left scapular fracture: 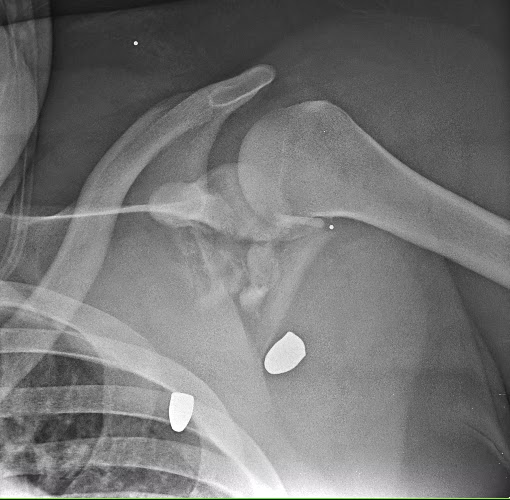 Literature Review:
Question 1:  Does the heat of firearm discharge sterilize a contaminated bullet?
A study by Thoresby and Darlow from 1967 simulated GSWs  using a series of gelatin models, contaminated bullets, and contaminated overlying “clothes”[1].   There were 3 “series” of testing. The first fired bullets contaminated with Serratia marcescens into a gelatin block. The second fired sterile bullets shot through pieces of military fatigues inoculated with Serratia overlying the entrance or exits side of the gelatin (with a piece of foil in between the cloth and gelatin to avoid direct transmission). The third fired bullets through an aerosolized cloud of Serratia in front of the gelatin block.  Significantly, there was bacterial growth along the bullet track in the gelatin in all three series (except for their respective controls). This suggests that bullets are not sterilized by heat upon discharge of the gun. Furthermore, it demonstrates that bacteria were drawn into the cavitation space via vaccum forces in series in which inoculated cloth was placed on the exit site.

A 1982 study used a dog model (cringe!) in which bacteria (Serratia marcescens)-inoculated cloth was placed on the entrance or exit side of the animal prior to gun discharge[3]. When compared to control animals (no inoculated cloth was placed), bacteriological examination demonstrated primary bacterial contamination of bullet wounds immediately after the shot. It was verified that there were two main mechanisms of primary bacterial contamination: (1) The bacteria were sucked into the wound by negative pressure of the temporary cavity at both entrance and exit sides, and (2) bacteria were carried into the wound tract by contaminated bullet itself.

In order to answer this question, one must understand that not all fractures caused by gunshot injuries are created equal. These wounds are classified by bullet velocity which is a function of firearm: low-velocity, high-velocity, or shotguns. Bullets with a muzzle velocity less than 2000 feet per second generally are defined as low-velocity. Bullets with a muzzle velocity greater than 2000 feet per second are classified as high-velocity. Examples of muzzle velocities of firearms are given in the table below. There is a general consensus that fractures caused by high-velocity weapons, shotguns, or intra-articular fractures should be treated with prophylactic antibiotics [4].

There is a paucity of randomized control trials assessing prophylactic antibiotic use in  gunshot wound - associated fractures.  In one small RCT, patients were randomized to receive IV cefazolin 1g q8 x 24 hours or no antibiotics altogether [5]. Patients that sustained high velocity wounds, wounds caused by shot guns, or required surgical intervention were excluded. A total of 96 patients were enrolled in the study. Only 67 were followed until completed union of the fracture. The 29 who were lost to follow up were equally distributed between study groups. Patients were scheduled to follow up 2 weeks after the original injury and then monthly thereafter. The definition of infection was intentionally broad and included any wound complication including prolonged wound drainage, erythema, localized fluctuance, cellulitis, or expressable drainage. Cultures were sent on drainage. Of the 67 patients with complete follow-up, 32 patients (36 fractures) were treated with antibiotics and the other 35 (37 fractures) were not. A total of 1 infection occurred in each group. Chi-Squared analysis demonstrated no significant difference in infection rates. Thus, it was concluded that prophylactic antibiotics did not significantly reduce the incidence of infection in GSW-related fractures.

A systematic review to address this question was published Papasoulis et al in 2013 [6]. A search of the MEDLINE database yielded 33 studies that pertained to the study goals. Of these only one was a RCT (the aforementioned Dickey et al article) and 9 were considered higher quality and 17 of any quality (including the 9 high quality studies) that addressed the specific question “Are antibiotics needed for the treatment of these fractures?”.

The total percentage of infections in fractures treated with antibiotics was 1.7%, while the infection rate for fractures treated without antibiotic treatment was 5.1%. The difference was not significant with the numbers available (p = 0.17). Inclusion of all studies, including 937 fractures, showed an infection rate of 2.4% when antibiotics were used versus 6.7% without antibiotics. When including the lower quality studies, the difference was significant (p = 0.031). However, in the discussion the authors point out that utilizing the lower quality studies is fraught limitations due to mixed data sets – failure to exclude high velocity injuries, unclear locations of gun shot wound, variable follow up periods.

Papasoulis et. al.  conclude by conceding the fact that infection after gunshot injuries is a rare complication (1.9% of 1156 fractures in the 23 studies that answered this question). Thus, large numbers of patients would have to be enrolled for a study to show a significant benefit with any intervention in terms of reducing infections in gunshot fractures.  Indeed, a post hoc power analysis of the results based on the higher-quality studies demonstrated a power of only 41%.

Clinical take home: Contaminated bullets are not sterilized on discharge of the firearm. Bullets traversing contaminated overlying clothes or skin track bacteria or particulate matter into the body tissues directly and by cavitation with result negative vacuum forces.   Despite this, infection after gunshot injury is a rare complication.  The current literature, however limited, suggests that there is no significant advantage of prophylactic antibiotics for non-operative fractures caused by gun shot wounds and the risks/benefits should be considered on an individual patient basis.