You are working in the emergency department when an otherwise healthy middle-aged woman presents following a syncopal episode.  She complains predominantly of shortness of breath and chest pain that radiates to her shoulder and jaw.  She has no other pertinent history besides being a smoker and her father having a myocardial infarction at an early age.  Her vitals are initially stable, but she soon becomes tachycardic and hypotensive.  Her labs are drawn and her ECG is below:

Because of concern for possible ST elevation in V1-V3,  the patient was emergently taken to the cath lab.  Findings?   Clean coronaries.


The EKG is re-examined and the differential diagnosis of deadly chest pain is considered.  An S1Q3T3 pattern is noted. A PE-protocol CT is performed which finds a large saddle PE.


The patient has an echocardiogram demonstrating flattening of the septum and RV dilation consistent with right ventricular strain. The patient is anticoagulated with heparin, stabilizes, and does not require thrombolysis.  She is later found to have an underlying gynecologic malignancy.

Contrary to what we set out believing when we begin in medicine, most pathology does not fit neatly into a diagnostic box.  While we memorize as medical students that ST elevation = MI and S1Q3T3 = PE, the waters are much muddier and the diagnosis often less clear in real life.

While the electrocardiogram (ECG) is not the most sensitive test for acute pulmonary embolism (PE), there are abnormalities that may help physicians make the diagnosis in the right clinical context.  Often taught abnormalities more specific for PE are S1Q3T3 (20-25% of acute PE patients), right ventricular strain (anterior and inferior T wave inversion, 4-11% of acute PE patients), and new incomplete right bundle branch block [1,2,3,4].  Although these findings may be uncommon in acute PE, they are more frequent in patients with massive acute PE with hemodynamic compromise.  Sinus tachycardia is also found in many patients with PE, however it is common in many other conditions.

While ST elevation is more commonly associated with acute coronary syndrome (ACS), it can also be associated with massive pulmonary embolism.  These patients may be mistakenly sent to the cath lab for percutaneous intervention, only to be found to have minimal coronary artery disease, further delaying the diagnosis of PE.  Since these findings are more commonly found in patients with hemodynamic instability from their PE, many of them can suffer increased morbidity and mortality from the delay in diagnosis.  Many of these case reports have noted that these ST elevations are commonly in the anterior leads with many having ST elevations in lead aVR along with the other classic ECG findings of acute PE described above [6,7,8,9,10].

ST elevation in the often ignored lead aVR has often been associated with left main coronary artery (LMCA) occlusion or wide-spread coronary artery disease.  Many times these patients will have widespread ST-segment depression in leads V4 to V6.  The finding of ST elevation in aVR in patients with massive acute PE is often found in patients with cardiogenic shock associated with ST elevations in leads III and V1.  This mimic of ischemic disease most likely results from the ischemia caused by a massive PE.  The large clot burden decreases RV output and LV preload, subsequently leading to decreased myocardial perfusion.  The RV strain against the large PE likely exacerbates the ischemic picture.  The leads aVR (RV outflow [11]), III (inferior RV), and V1 (anterior RV) all reflect the ischemia found in the RV [12].  The associated V4-V6 ST depression found in some patients with massive acute PE likely reflects the subendocardial ischemia from the decreased LV output.

In a case series by Zhong-Qun and colleagues [12], they found similar ECG findings (below) on three patients with massive PE who were hemodynamically unstable.  All the patients had elevations in aVR as well as ST depressions in I, V4-V6.  There also appears to be an S wave in each lead I in all three patients as well as Q waves in lead III in at least two patients.  There is also evidence of ST elevation in V1 in two patients. 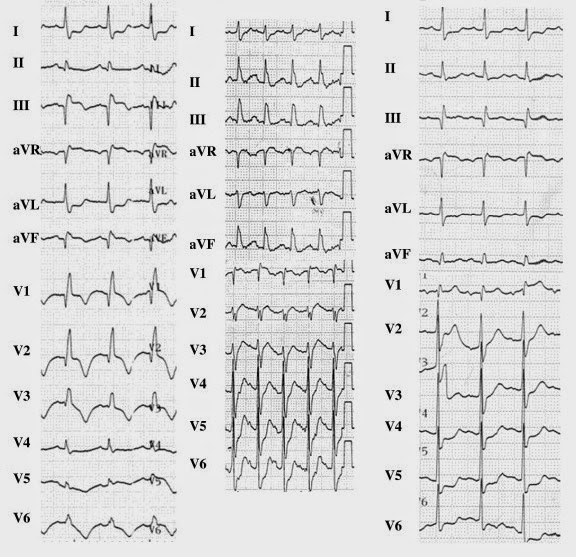 There is another great similar case over in Life in the Fastlane, where the patient also presented after a syncopal episode and ultimately suffered PEA arrest from a massive PE.  Again ST elevations are seen in anterior leads as well as aVR.  The ECG also demonstrates new RBBB with right ventricular strain (deep T wave inversions in leads V1-V3), other common findings in acute PE.

Take home points:
-Specific acute PE ECG abnormalities are not common, but are more likely to be present with increasing severity of pulmonary embolism
-ST elevations may occur in massive acute PE, usually associated with ST elevations in leads aVR and V1, look for other classic PE ECG abnormalities and keep PE on the differential
-although not discussed above, consider bedside echo to help you make the correct diagnosis.

Submitted by Steven Hung (@DocHungER), PGY-2
Faculty Reviewed by Doug Char
Special thanks to Heather Webb (@webbmd) for yet another great case.
Posted by Unknown at 5:37 AM