You are working the day shift at Children's Hospital when you get a medical control call from EMS.  They responded to a call for "altered behavior" at a house to find a partially-clothed and confused teenage boy who was discovered "talking nonsense" by his parents in the living room that morning.  They call you because the patient is somewhat "agitated" and just won't stop picking at every line and piece of equipment.  They want your okay to give him some versed to chill him out.  You agree to 2 mg of IV versed and await his arrival in the emergency department.

On arrival, the patient has a dry mouth, dilated pupils, and speaks some unclear, but seemingly pleasant gibberish.  Mom, through her tears, tells you the patient takes no medications but has "experimented with drugs" in the past.  There is radio silence when you listen for bowel sounds and your ungloved hand meets a dry axilla, confirming the clinical picture of an anticholingeric toxidrome.  Noting his heart rate in the 140's, you decide that it is prudent to get an EKG: 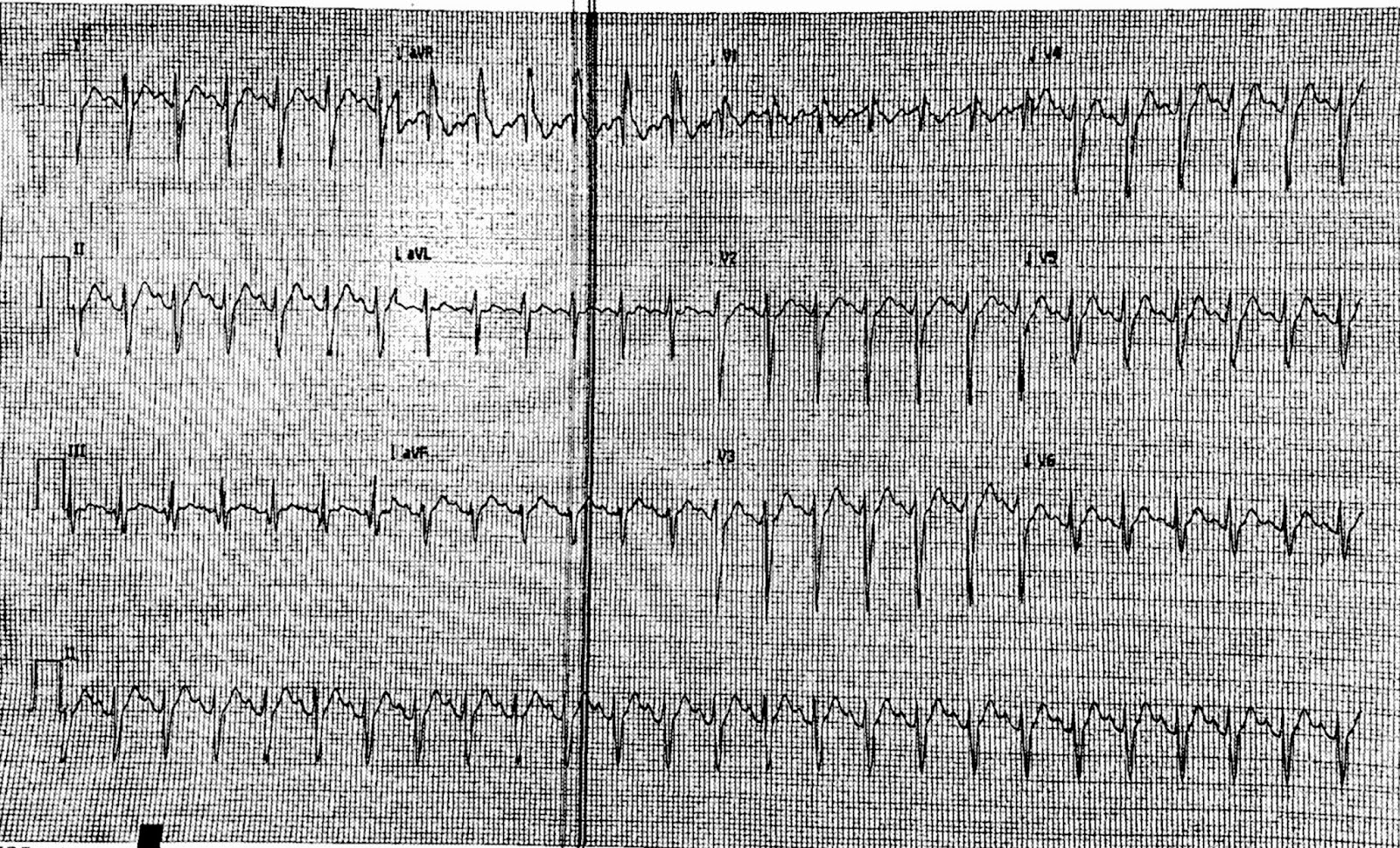 Together, these findings are indicative of Na-channel blockade, the hallmark of which is a widened QRS due to delay of phase 0 depolarization of the cardiac action potential:

Interestingly, the right heart seems to be more sensitive to Na-channel blockade as evidenced by the common finding of RBBB and Right axis deviation in Na-channel blocker toxicity [Ref 1].  This is corroborated by the association of RBBB with Brugada syndrome, which is due to a genetic defect in the SCN5a Na channel.

When you think of the toxicologic differential for anticholinergic toxicity with Na channel blockade, benadryl and TCAs are at the top of your list. Given the widened QRS and overall clinical picture, you administer Sodium bicarbonate and the patient's QRS narrows.  He is admitted to the hospital and has full resolution of all symptoms by morning.  Once awake, he admits to taking "a lot" of benadryl because he was having trouble sleeping.

While we use diphenhydramine for blockade of the histamine H1 receptor, it is a dirty drug that has  blocks both muskarinic acetylcholine receptors and voltage-gated Na channels as well [Ref 2].  This patient's clinical presentation - altered, dry, and tachycardic - is secondary to development of an anticholinergic toxidrome.  The abnormal EKG findings - right axis deviation, widened QRS, R' in avR - are due to Na-channel blockade.

It is important to be familiar with the EKG findings of pharmacologic Na-channel blockade because it is a property of many medications, including both cardiac and non-cardiac drugs.  See the table below from Kolecki & Curry  (1997) [Ref 3] for some common examples: 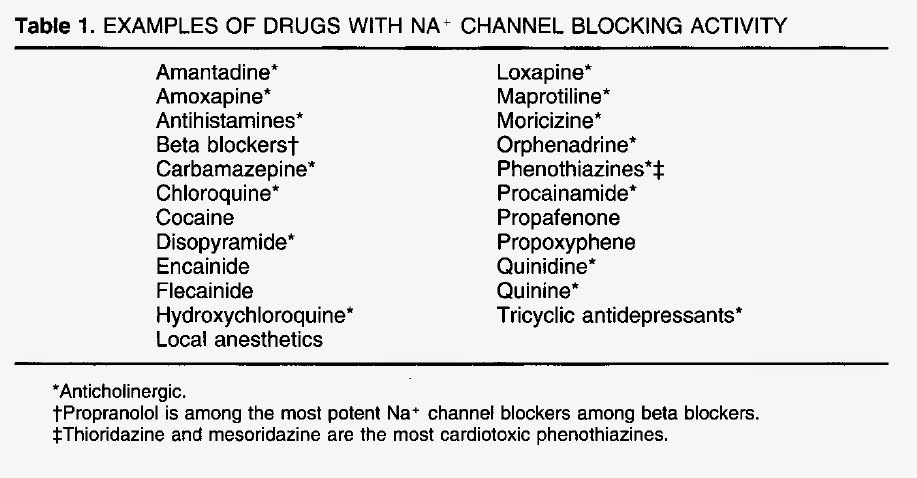 Because of the importance of Na influx at essentially every stage of  heart beat generation,  the cardiac effects of Na-channel blockade can have a number of manifestations, the unifying theme of which is a widened QRS [Ref 1, 3]:

With regard to the definition of widened QRS, it is important to note that unlike the standard definition of  > 120 ms, the QRS is considered wide in toxicology when it exceeds 100 ms.  This is rooted in part in a prospective study of 49 patients with TCA overdose that examined the correlation between QRS duration and risk of seizure and/or ventricular arrythmmia [Ref 4].  It was found that in acute tricyclic overdoses, seizures occurred "at any QRS duration of 0.10s or longer (p <.05) but ventricular arrythmmias were seen only with QRS duration of 0.16 seconds or longer (p < 0.0005)."  This finding for TCA overdose has been generalized to the management of all Na-channel blocker overdoses. Therefore, in our patient above, with an initial QRS of 117 ms, there may be cause for concern.

(2) Ventricular Arrythmmias - ventricular arrythmmias occur in Na-channel blockade by a variety of mechanisms. One proposed mechanism is that intraventricular conduction is slowed to a point at which unidirectional block and re-entry tachycardias can develop.  A second mechanism has to do with the fact that many Na channel blockers also block K channels (i.e. all group 1A anti-arrythmmics).  K blockade is associated with QT prolongation, thereby putting patients at risk for torsades.

(3) Bradydysrhythmias - Bradydysrhythmias in the context of Na-channel overdose are thought to occur secondary to Na-blockade at the pacemaker cells.  Bradycardia is rare (but very ominous) in the context of overdose with agents, such as benadryl or TCAs, that also have tachycardia-inducing anticholingeric activity.  Propanolol, a beta-blocker with Na-channel blocking activity, causes bradycardia by beta-blockade as well. 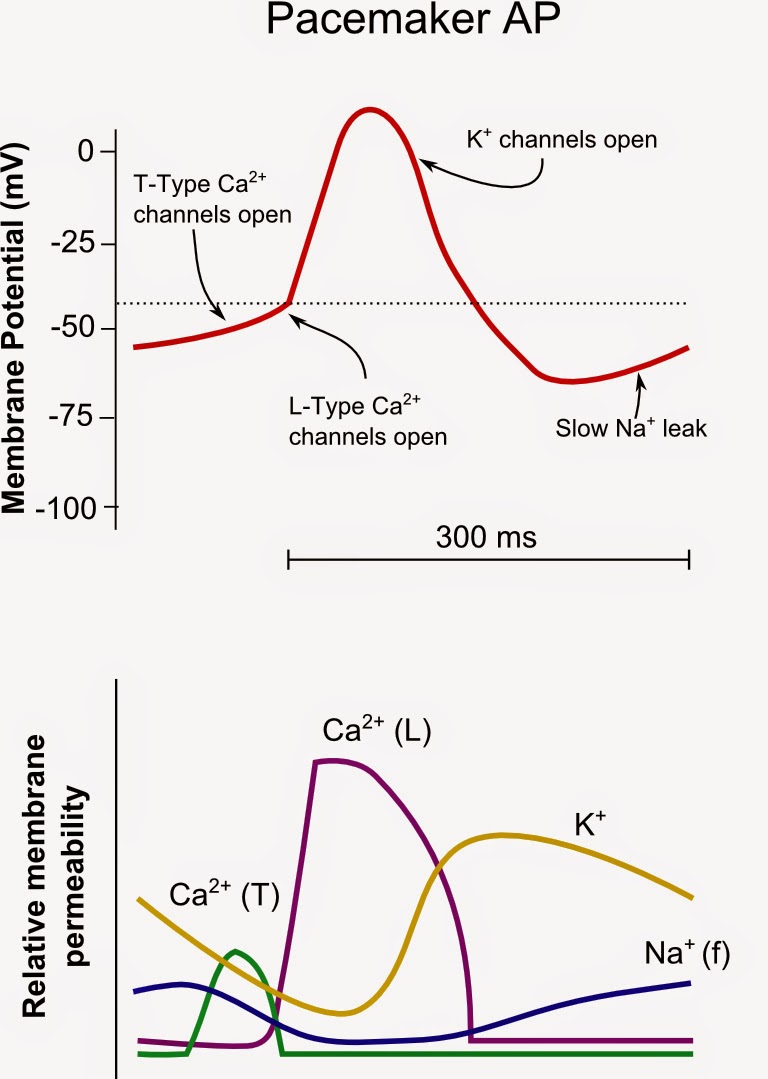 With regard to treatment, the mainstay is sodium bicarbonate, which has been demonstrated to narrow the QRS in Na-channel blockade secondary to diphenhydramine overdose [Ref 1, 5].  Sodium bicarbonate should be titrated to effect on the QRS.  It is generally recommended that initial boluses of 1 Amp of Sodium bicarbonate at a time be administered until the QRS narrows. Following this, one can consider starting a drip (3 ampules of sodium bicarbonate in 1L D5W infusing at twice the patient's maintenance rate) with close attention paid to the patient's potassium to prevent development of hypokalemia [Ref 1].  As the antidote effects of Sodium bicarbonate have more to do with the Sodium hypertonicity than alkalinization, hypertonic saline can also be considered (and actually works better in a swine model of TCA toxicity) [Ref 6].  Administration of physostigmine can reverse the clinical findings of anticholinergic toxicity, but should be used with caution in patients with a widened QRS, as reversal of anticholingeric tachycardia can unmask Na channel blockade at the pacemaker cells, leading to bradycardia, heart block, and cardiovascular collapse.


Take Home Points -
- If the QRS is wide (> 100 ms) in your overdose patient, they may have Na-channel blockade and Sodium bicarbonate should be considered for treatment.
- All that electrophysiology you learned in medical school does have clinical relevance.
- Clinical syndrome + EKG will likely lead you to the right treatment pathway: