When What Goes Up Does Not Come Down ... Priapism Management in the ED

Clinical Scenario: A 42 year old man with a history of hypertension presented with approximately 12 hours of priapism. He woke up and noticed his erection would not go away, even with ice, and is has been increasingly painful.  He denies any history of erectile dysfunction medication, sickle cell disease, malignancy or recreational drug use.  Urology was consulted, and after performing a penile ring block, two 18-gauge needles were inserted into the corpora cavernosa.  A few mL of blood were aspirated, and then approximately 100mcg of phenylephrine were injected bilaterally with resolution of the patient’s pain and erection.  Notably, he presented several days later with the same symptoms.

Clinical question: What are the potential causes of priapism, and how should it be managed?

Review: Priapism is defined as an undesired erection lasting more than 4 hours, and can be divided into ischemic (low flow), non-ischemic (high flow) and stuttering (i.e. recurrent or intermittent) etiologies.  Prolonged ischemic priapism results in erectile dysfunction, corporeal fibrosis, and tissue necrosis.  Ischemic priapism results in a fully erect, painful penis; whereas non-ischemic priapism (which is less commonly seen) typically presents with a partially erect penis without persistent pain.   Sickle cell disease, thalassemia, leukemia, multiple myeloma, and medication side effects (intracorporeal injections, antidepressants, antihypertensives, and recreational drugs such as cocaine) are all potential risk factors for ischemic priapism; whereas non-ischemic priapism is usually attributable to congenital or traumatic arterio-venous malformations.  Stuttering priapism has been less studied but its etiology is thought to be related to ischemic priapism, and is seen more commonly in men with sickle cell disease, or more rarely with neurological disorders.  Overall incidence of priapism is low (1.5 per 100,000 person-years in all comers) but much higher in some populations (89% of males with sickle cell anemia will have an episode of priapism by age 20).

Diagnosis of priapism is clinical, but the differentiation between ischemic and non-ischemic can be confirmed with cavernosal blood gas analysis and Doppler ultrasonography.  Ischemic priapism will result in dark blood that is acidotic, hypoxic, and hypercarbic, and ultrasound will demonstrate minimal or absent flow.

Ischemic priapism is an urologic emergency, and along with analgesia, urologic consult should be obtained.  Oral systemic sympathomimetics such as terbutaline or pseudoephedrine can be initial
adjuncts, but clinical efficacy is estimated to be only 28-36% in one study, thus it is not standard of care.  Aspiration of the corpora, which is considered definitive care, involves inserting a 19 or 21 gauge butterfly needle into each corpora cavernosa.  Withdrawing about 5mL of blood should decompress the corpora.  100mcg of phenylephrine in 1mL of normal saline can then be injected into the corpora, and this can be repeated every 3-5 minutes until detumescence.  Vital signs should be measured continuously.   Should repeated aspiration and phenylephrine fail, shunt surgery can be performed, which involves creating a fistula between the corpus spongiosum and corpus cavernosum. 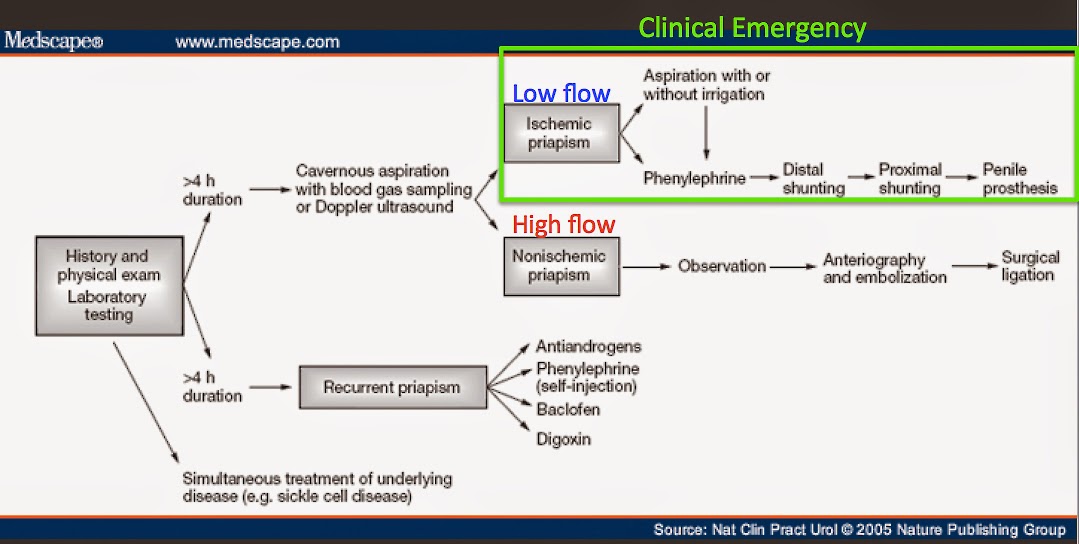 Non-ischemic priapism (because of maintenance of oxygenated blood) is non-emergent and can be followed up as an outpatient for arteriography with embolization of any offending fistulas.  Treatment of stuttering priapism focuses on prevention of future episodes through the use of hormonal therapies or PDE5 inhibitors, which paradoxically seem to aid in prevention in idiopathic and sickle-cell related cases.

Visual learner?  Here is great 5 min review of priapism by EM in 5 and a youtube video by Larry Mellick.

Email ThisBlogThis!Share to TwitterShare to FacebookShare to Pinterest
Labels: Urology